This page was made to honor our father who passed away on April 1,2008. Please share any memories you may have had with our dad: sad ones, scary ones, funny ones and not so funny ones. We love you dad!

I JUST STARTED WORKING WITH UNCLE AND THE BOYS AT THE MGM TOWERS....SINCE I WAS NEW TO THE TRADE I HAD TO WORK WITH UNCLE WILLIE CUZ HE MADE ME A JOURNEYMAN AND HE DOESN'T WANT ME TO WORK WITH ANYBODY ELSE CUZ THEY MIGHT FIND OUT THAT I WAS NEW....ANYWAYS THE BOYS TOLD ME THAT YOU BETTER HUSTLE IF YOU'RE GOING TO WORK WITH DAD....SO UNCLE TELLS ME TO GO AND MAKE THIS CUT FOR ME ON THE WET SAW...I COME BACK WITH THE CUT AND HE SAYS TO ME..."DID YOU MAKE THE CUT I TOLD YOU TO MAKE FOR ME?" I TOLD HIM YES AND GAVE HIM THE TILE....SO HE LOOKS AT IT AND SAYS, "THIS ISN'T THE CUT I GAVE U TO MAKE FOR ME!!" U KNOW HOW HE GETS WHEN HE GETS MAD....SO HE TELLS ME TO GO AND MAKE ME ANOTHER ONE....SO I GRAB THE NEW TILE FROM HIM AND TURN TO GO MAKE A CUT.....SO AS I TURN TO WALK TO MAKE A CUT, A TILE FLIES RIGHT AT ME AND HITS ME ON MY BACK....I WAS LIKE OH, I THOUGHT SOMETHING FELL ON ME....BUT WHEN I LOOKED BACK IT WAS UNCLE WILLIE THAT THRU THE TILE AT ME....THAT'S WHEN I WENT TO WILLIE JR AND ASKED HIM IF I COULD WORK WITH HIM...HE LAUGHED AND I BEGGED HIM TO WORK WITH HIM....DAD IS TOOO MEAN...BUT U KNOW UNCLE WIL ALWAYS WANTED THINGS DONE THE RIGHT WAY AND I THANK HIM FOR THE JOB HE HAS GIVEN TO ME AND FOR SHOWING ME THE TRADE....ALSO TO THE BOYS, VICO, WIL AND VA'A...GOOD LOOKING OUT....LOVE YOU UNCLE AND MISSING YOU....YOUR NEPHEW, SKIVI

OK ... growing up, we always had transportation issues (lol). I first met Bro Nomaaea after playing a basketball game with Rosie for Banning HS... we were lucky enough to make the varsity squad but I was not lucky needing a ride home after the game. "Rosie, do you think your dad could take me home?" She didn't even answer. But went over to her big brown van to ask her dad. No problem, right? "Yeah, tell your friend I can take her to the bus stop." I heard him say... He tormented me the whole way on every possibility: to what bus I could take home from what stop he'd drop me off... he even offered me 60 cents when I told him it was a dollar and I only had a quarter to ride! We worked on the math and my payback arrangements ... uGH!!! ... lol ... this would only be the beginning but I never worried about how we'd get home when Bro Nomaaea was around. He left triumphantly. I will never forget that. Love you Uncle Willie... 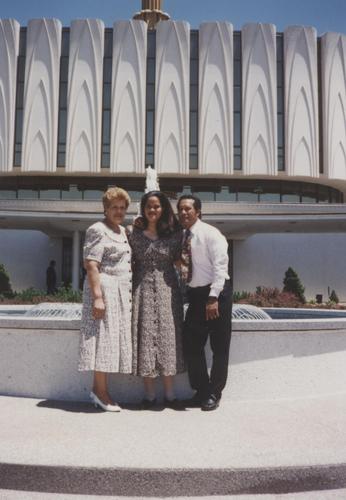 There are sooooo many memories of Dad that I seem to only think of the jokes he would play on us. So this memory is a funny one like sooo many others of his. Well not very many people know my Dad had dentures because he NEVER told anyone and NEVER took them out...LOL. When he came back from the dentist we didn't know he had gotten dentures, he started yelling at us to clean the refridgerator. We went and looked in and there was nothing wrong it wasn't a mess. So we said " it's fine" he said NO look in the drawer at the tomatoes and to our suprise he sunk those dentures into the tomatoe. We coulodn't stop laughing and he was laughing too with the whole top row of his teeth missing. That was my Dad anything for a laugh, I sooo miss that but the memories I have will last for a very long time. LOVE YOU DAD!!!!!!!!!

When I was getting ready to leave for my mission I remember my dad sitting me down and telling me that he wanted me to give my all. And, if something were to ever happen to anyone in the family, he wanted me to stay on my mission and not worry about anything back at home. He also told me that he wasn't going to write me while I was gone and that I shouldn't be sad about it but to always remember how proud he was of me and the decision I made to serve the Lord. Well, to my surprise I received a birthday card from home and he had written more than just his name his words have always been with me and this is what he wrote: "Man is born with two ends one to sit on and one to think with. Success is determined by which end man uses the most. So when you think about doing something DO IT! Don't sit on it!" I've always been grateful for those words. My dad was a wise man. I love him and miss him dearly. Dad you will forever been in my heart!

I sure do miss Uncle Willie as with the rest of our Parents, Aunty Rosie, and My Dad..I've noticed in my short time 'I've been here in Vegas especially at our little family gatherings how much I miss the laughter of our Dad's, Your Dad's high pitched laughter at something he was bagging on my Dad about..Definately the Fred Flintstone and Barney Rubble show. Those two were always laughing and telling jokes. I do have a fond memory of your father when it was just me and him one time. It was when we lived on Spreckles Ln in Redondo Beach and I was still in Junior highschool and your Dad came by to pick my Dad up to go to Prairie Park to play ball, but my Dad wasn't around, so I went instead. It was just your Dad and myself going to play ball at the park. I'll never forget how when we were on the same team, he made me feel like I was the franchise player cuz he was the point guard ( who was gonna argue with him??..lol) and he kept throwing the ball to me the whole time telling me to shoot. Of course I made 90% of my shots as to not let your Dad down. I'm serious, I think that's the best I've ever played at Prairie park on that particular day..lol After our game was done, we sat against the fence just the two of us having a Uncle and nephew bonding moment and he was telling me some of his childhood stories growing up in Samoa and the origin of his Tattoo on his forearm. I was like a little kid just smiling and fascinated of his experiences growing up in Samoa. It was funny though because at the end of his Tattoo story, I was so excited and pumped up to get a tattoo, and he laughed and said, " No Wayne, this was me in my Crazy days!"hehe I sure do miss and Love you Uncle

Copyright © 2023 Respectance is an IIZT production. All rights reserved.